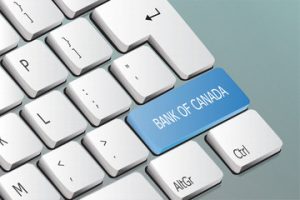 The Bank of Canada under the new governor, Tiff Macklem, wants to be “unusually clear” that interest rates will remain low for a very long time. To do that, they are using “forward guidance”–indicating that they will not raise rates until capacity is absorbed and inflation hits its 2% target on a sustainable basis, which they estimate will take at least two years. As well, they indicate that the risks to their “central” outlook are to the downside, which would extend the period over which interest rates will remain extremely low. The Bank also made it clear that they are not considering negative interest rates. The benchmark interest rate remains at 0.25%, which is deemed to be its the lower bound.

The Bank is also continuing its quantitative easing (QE) program, with large-scale asset purchases of at least $5 billion per week of Government of Canada bonds. The provincial and corporate bond purchase programs will continue as announced. The Bank stands ready to adjust its programs if market conditions warrant.

With the benchmark rate at its effective lower bound, the Bank’s quantitative easing is the way it is lowering mid- to longer-term interest rates, reducing the borrowing costs for Canadian households and businesses. The Bank assumes that the virus will be with us for the entire forecast range, which is two years.

The Bank released its new economic forecast in today’s July Monetary Policy Report (MPR). The MPR presents a central scenario for global and Canadian growth rather than the usual economic projections. The central scenario is based on assumptions outlined in the MPR, including that there is no widespread second wave of the virus in Canada or globally.

The Canadian economy is starting to recover as it re-opens from the shutdowns needed to limit the virus spread. With economic activity in the second quarter estimated to have been 15 percent below its level at the end of 2019, this is the most profound decline in economic activity since the Great Depression, but considerably less severe than the worst scenarios presented in the April MPR. Decisive and necessary fiscal and monetary policy actions have supported incomes and kept credit flowing, cushioning the fall and laying the foundation for recovery.

Mincing no words, the MPR acknowledged that the COVID-19 pandemic has caused a “worldwide health-care emergency as well as an economic calamity.” The course of the pandemic is inherently unknowable, and its evolution over time and across regions remains highly uncertain.

In Canada, the number of new COVID-19 cases has fallen sharply from its April high, and the economic recovery has begun in all provinces and territories and across many sectors. Consequently, economic activity is picking up notably as measures to contain the virus are relaxed. The Bank of Canada expects a sharp rebound in economic activity in the reopening phase of the recovery, followed by a more prolonged recuperation phase, which will be uneven across regions and sectors (Figure 1 below). As a result, Canada’s economic output will likely take some time to return to its pre-COVID-19 level. Many workers and businesses can expect to face an extended period of difficulty.

There are early signs that the reopening of businesses and pent-up demand are leading to an initial bounce-back in employment and output. In the central scenario, roughly 40 percent of the collapse in the first half of the year is made up in the third quarter. Subsequently, the Bank expects the economy’s recuperation to slow as the pandemic continues to affect confidence and consumer behavior, and as the economy works through structural challenges. As a result, in the central scenario, real GDP declines by 7.8 percent in 2020 and resumes with growth of 5.1 percent in 2021 and 3.7 percent in 2022. The Bank expects economic slack to persist as the recovery in demand lags that of supply, creating significant disinflationary pressures.

Governor Macklem said in the press conference that what he wants Canadians to take away from today’s Bank of Canada’s actions is “Canadian interest rates are very low and will remain very low for a very long period”. The reopening of the Canadian economy is well underway. Economic activity hit bottom in April and began expanding in May and accelerated in June. About 1.25 million of the 3.0 million jobs that were lost in March-April, were added in May and June.

Some activities, including motor vehicle sales, have already seen a strong pickup since April. Likewise, housing activity fell sharply during the lockdown but is beginning to recover quickly. In contrast, some of the hardest-hit businesses, such as restaurants, travel and personal care services, have only just started to see improvements in recent weeks and are expected to continue to face significant challenges.

The chart below, from July’s MPR, shows that household spending patterns have shifted since the onset of the pandemic. Some of these shifts might last. In the central scenario, the effects of the downturn and lower immigration hold down housing activity over the next few years. After a near-term boost from pent-up demand, residential investment slowly increases as income and confidence recover.

Check out our full line of DLC Visa cards http://betterthanbankmortgage.com/visa-cards/